Subscribe to our newsletter and never miss any upcoming articles

2). Why Tunnel HTTP Traffic Through An XSS Channel? 3). Benefits Of XSS Tunnelling 4). How Does XSS Tunnel Work? 5). An Attack Process.

What is an XSS tunnel?

XSS Tunnel is the standard HTTP proxy that sits on an attacker’s system. Any tool that is configured to use it will tunnel its traffic through the active XSS Channel on the XSS Shell server. The XSS Tunnel converts the request and responds transparently to validate the HTTP responses and XSS Shell requests. XSS Tunnel is written in .NET and requires .NET Framework to work. It is a GPL Licensed open source application. 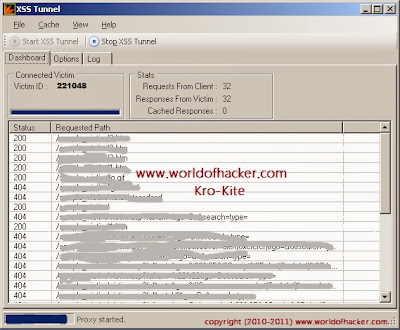 What is an XSS Tunnelling?

XSS Tunnelling is the tunneling of HTTP traffic through an XSS Channel to use virtually any application that supports HTTP proxies.

What is an XSS Channel?

An XSS Channel is an interactive communication channel between two systems that is opened by an XSS attack. At a technical level, it is a type of AJAX application that can obtain commands, send responses back, and is able to talk cross-domain. The XSS Shell is a tool that can be used to set up an XSS Channel between a Slave and an attacker so that an attacker to control a Slave’s browser by sending it commands. This communication is bi-directional.

XSS Shell is a powerful XSS backdoor and XSS zombie manager. This concept was first presented by "XSS-Proxy – xss-proxy.sourceforge.net". Normally during XSS attacks, an attacker has one shot, however, an XSS Shell can be used interactively to send requests and receive responses from a Slave, it is also possible to backdoor the page and keep the connection open between the attacker and the Slave.

It is a good way of bypassing the following protections:

How Does XSS Shell Work? 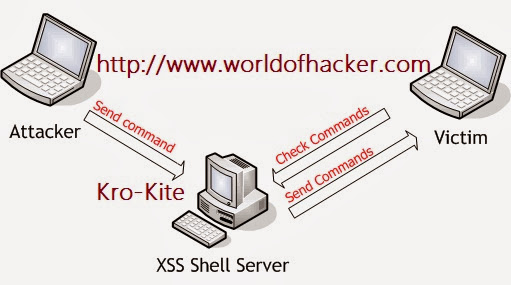 The XSS Shell is an application that has three main parts.

Firstly, the server-side part of the XSS Shell coordinates the XSS Shell between an attacker and the Slave. It is a server-side application and requires an ASP and IIS web server. It uses an MS Access database as storage.

The second part of the tool is client-side and written in JavaScript. This loads in the Slave’s browser and is responsible for the receiving and processing of commands together with providing the channel between the Slave and the attacker.

The final part of the XSS Shell is the administration interface. An attacker can send new commands and receive the responses from a Slave(s) browser instantly from this interface. Again it is ASP and requires IIS. 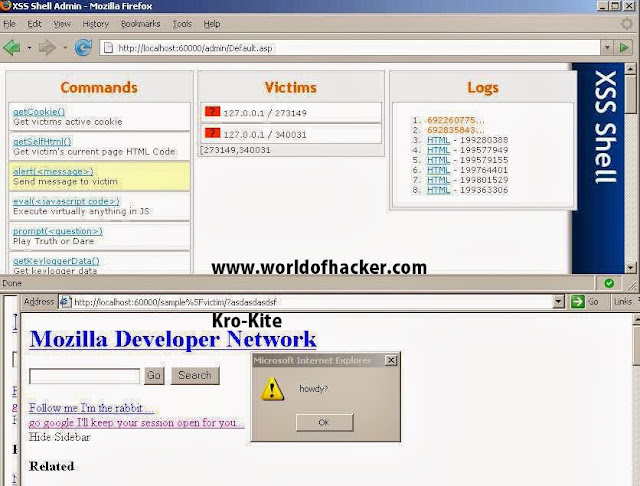 All of the following steps do not wait for each other and are constantly checking for responses and requests within specified time delays.

· XSS Shell communication relies on remote JavaScript loading in order to bypass the same-origin policy · In the first execution, XSS Shell re-generates the page. Thus even if the Slave follows; XSS Shell will remain on the page and therefore, allows the attacker to keep control of the Slave’s browser. As soon as the Slave obtains that window (even if the Slave follows a to another website) the Slave’s session will be open and the browser will follow an attacker’s commands. · It is open source and is quite easy to implement new commands such as port scanning. · XSS Shell is especially dangerous in permanent XSS vulnerabilities. Due the fact that an attacker can easily infect hundreds of browsers and manage them simultaneously.

To Install The Admin Interface;

To Configure The XSS Shell For Communication;

You should now be able to open the admin interface from your browser http://[YOURHOST]/xssshell/admin/. Testing should be possible by modifying the "sample_victim/default.asp" source code and replacing the "http://[YOURHOST]/xssshell/xssshell.asp" URL with a specific (i.e your own) XSS Shell URL. Open the "sample_victim" folder in another browser and may then be uploaded to another server.

Now a zombie in the admin interface should be visible. Write something into the "parameters" text area and click "alert()". An alert message should appear in the Slave's browser. Security & Extra Configuration:-

If file names are changed; Be sure to check the "ME", "CONNECTOR", and "COMMANDS_URL" variables in xssshell.asp.

HOW CAN YOU EXTEND?

Secondly, Implement it in the admin interface;

There are parameters and lots of helpers in the code. Investigate other commands for reference. Enable the debug feature in order to debug the new commands easily. Debug has several levels, which can be increased in number to get more detailed debug information.

Why Is It Better Than The Classic

· An attacker would have more than one shot. After controlling a Slave(s) browser the attacker is able to decide their next move based on responses and the current environment. · It enables you to bypass the following; o IP Restrictions, o Basic/NTLM Auth Based or similar authentications. · As it is the intention to send alert(“0wned!”) to thousands of victims and build a temporary XSS powered botnet!

Why Tunnel HTTP Traffic Through An

· It enables the use of virtually any tools that support HTTP Proxies! · It is possible to use automated tools such as Nikto, SQL Injectors, HTTP brute forcer against an IP restricted areas of the website, · It allows the configuration of your local browser to use the XSS Tunnel and browse the website with a Slave’s credentials from your own browser and it does not involve the use of any kind of complicated cookie / IP / user agent based checks, · It is very good for demonstrating the result of an XSS attack. 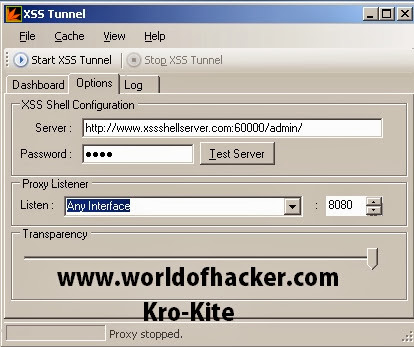 How Does XSS Tunnel Work?

If there are new commands, it loads them and processes and sends the responses (this can be simply a confirmation code or source code of a page or a binary file) to the XSS Shell server. Commands and responses run in a multithreaded fashion.

By default, the XSS Tunnel caches JavaScript, CSS, and image files for better performance. This is really required if using the XSS Tunnel with a browser. If requested the resource is already in the cached XSS Tunnel and can be obtained from the local cache and sent to the client application.

Caching can be disabled or the cache can be managed from the user interface of XSS Tunnel.

Did you find this article valuable?